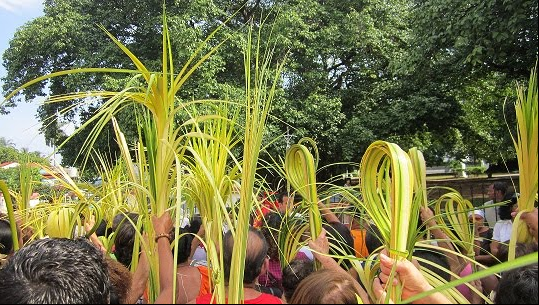 It takes political will, good timing, demographic change, wealthy supporters, strong alliances and strategic calculation to shift ossified policy.  But in the case of U.S-Cuba relations, the theater of rapprochement also involves a heavy measure of syncretic symbolism.  The watersheds of the US Cuba rapprochement  have been timed around  dates that invoke fate and divine cosmology,  inaugurating a calendar in parallel to political logistics and secular time and bigger than capitalism or cold war.

These symbolic choices are  rich with images, dates, and signs that invoke new epochs and dispensation for Cubans everywhere.Those gestures to popular religion and belief are significant:  they incite and satisfy a Cuban fondness for both conspiracy and political hermeneutics.  The symbolism helps to unite those who can read the codes.

The syncretic and popular frames also seem an attempt to clear the decks in the political imaginary.  They compete old ritual orders, old political epics, and open a new epoch of exchange:  an era of transaction as triumph.

Barack Obama chose December 17th, 2014 to announce historic changes to U.S. Cuba relations.  The feast day of San Lázaro is honored and celebrated by Cubans raised with a syncretic national culture hugely influenced by santería.  Santería and Palo’s rituals and symbolism are deeply embedded in the calculations of the Cuban state and the feast days of the Regla de Ifá are part of Cuban national culture, where every important patron saint in the national imaginary is syncretized with an African orisha.  For practitioners of Afro-Cuban syncretic religions, and for secular Cubans of all races shaped by Cuba’s African religions and their worldview,  Babalú Ayé is immensely popular and considered particularly miraculous.  He is the orisha tied to illness and to healing, a deity cloaked in humility but with immense powers for transformation and protection.

Cubans drop pennies to San Lázaro, the beggar saint, and leave them on the floor hoping for miracles.  Pennies to tempt heaven, in a sense, rituals from a national culture whose spirituality is based in syncretism, in a faith that emerged from tension between the law and the secret, between masters and slaves.  Cuban national culture is fundamentally shaped by the political knowing and the violence that created santería.  Cubans understand ideology syncretically, scanning for parallel truths, for double meanings, for divided audiences.  For truths that speak to the friend and the enemy.  This other Cuban “double consciousness,” has become part of Cuban cultural and political intuition. It understands that  gestures always have at least two meanings, that every ritual act is coded,  and that every  exercise of authority, human or divine, demands a transaction.

The release of the news on December 17 was both a coded gesture and an act of political cunning:  it gathered Cubans everywhere – many divided by ideology, race, wealth, money, distance, generation, by half a century of political stasis – to read signs above and beyond the words of the leaders and confrontations, to mark time cosmologically, and to think about wounds and sickness and the possibility of miracles and healing.  Given the wounds and the rocky road ahead, many of us remembered the pennies tossed to San Lázaro since it was clear that the new epoch would demand as many transactions as it would acts of faith.

Today, Sunday March 20th, President Obama arrives in Havana, landing in Cuba on a rare coincidence of the Spring Equinox, and Palm Sunday, and it seems another cosmological time is being inaugurated. For secular pantheists and diviners of political symbolism, this new coincidence is rich and evocative.  Time in tension, the balance of night and day, primal feast and astronomical architecture, the vernal equinox is overladen with meanings tied to sun cycles, divine struggles, tension and balance, fertility and new beginnings, and to the struggle between darkness and light.  That’s a lot of cosmic augury.

Add to all this the day’s consecration to Christ’s triumphal entry into Jerusalem, and for Cubans, scanning for symbols and syncretic code-switching, the fateful date begins to demand an irresistible calculation. The Cuban resonances are significant. After all, the last time Christ’s triumphal but humble entry into Jerusalem was invoked in Cuban history, the analogy was used to sacralize the triumphant arrival of Fidel in Havana as the Revolution succeeded in 1959. 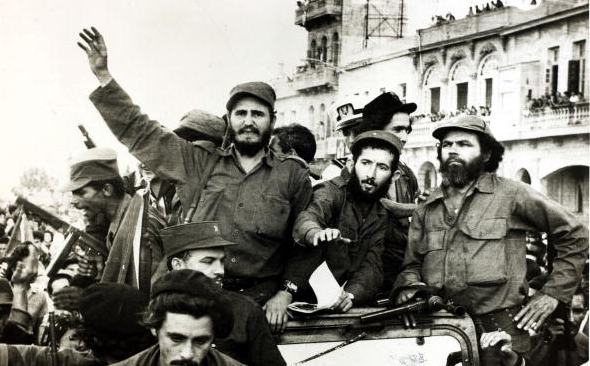 Certainly, Obama’s Palm Sunday in Havana promises a rock star gospel appearance that will no doubt supercede the Pontiff’s visit to Cuba earlier this year.  And an hour before wheels up at Andrews, the anticipatory press coverage was nothing short of frenzied. It’s all pretty exciting.   The pop-culture reimaginings fall short as Castro in January 1959 is traded for Obama in March 2016. I reach for Ché meets Jesus Christ Superstar meets Godspell meets The Wiz meets Rent (which was produced in Havana, after all), but nothing works.  It is simply unprecedented, not yet kitschable.

Epochal visits on Palm Sunday, for a country of lapsed Catholics and lapsed communists are heavy enough with ritual symbolism and almost as cosmological as the vernal equinox. The return of Cubans to the Catholic Church, its humanism, its masses, its charity, and its social networks, and the Pope’s role in the geopolitical reconciliation and the Catholic Church’s growing authority and presence in Cuba makes Obama’s arrival on Palm Sunday an astute and uncanny choice.  For Cubans with any religious knowledge, Obama’s arrival on this day Obama evokes Jesus and possibly Fidel, but he rather bumps the Pope as letter-carrier in this rapprochement, coming in person and in triumph to a sacred city of the Cold War.

But the President’s arrival on Palm Sunday 2016, and the universe of images that will follow, will also steal the lede and the image repertoire from Las damas de blanco, who have traditionally marched following the mass on the day in Havana (and on every Sunday) to protest the fate of their relatives as political prisoners of the state.   Perhaps the timing can be read as a tacit acknowledgement of that struggle by Washington (and perhaps not), but with Obama in town, the Cuban state can effectively photobomb the opposition into the margins on one of its most visible days of action .

For many devout and half-hearted catholics in Cuba and in the diaspora, attending mass on Palm Sunday, or Domingo de ramos, means springtime, crowds, and religious swag. One braves the crowds and the bad conscience for the opportunity to collect guano bendito, holy palm fronds, ritually blessed and distributed in the church, which are considered to bless and protect the recipient.  The fronds are often shaped into crosses, hung on the wall, and linger in homes for years; they are also sometimes used for burning in santería rituals (in particular for protection from lightning and thunder in a storm).  And in a sense, Obama’s trip is also being preceded by the distribution of political guano bendito, bits of policy swag to go with the ceremony:  incentives for Americans in the form of currency exchanges, incentives for Cubans in the form of U.S. bank accounts, and posters and T-shirts, and flags everywhere.  New fetishes to take home in place of Revolutionary relics.  A fresh new face and a new dynamic duo, Raúl and Barack, to rival those old photos of Ché and Fidel. Palm fronds, posters, and currency:  pennies hard won and new icons of blessed transaction.