We are in a state of shock and disbelief; relieved and disoriented, getting to the end of the roller-coaster ride and wondering how to live without the thrill or the safety restraint, how to step out of the car and back onto prosaic solid ground after the ride.  People are asking us how it felt. We say things and are watching things go on but really we are still in Havana on Monday and Tuesday.  We are still reckoning with the press conference.  We are still parsing the speech.  We are still in the audience. And despite all our jadedness, our pessimisms of the intellect and optimisms of the will, despite all we can muster of  cynical reason and disillusion about Cuba and Obama’s trip, we are many of us in a secret and sober state of joy.  A kind of after-glow.

Every moment deserves comment.  For Cubans in Cuba and for Cubans in the United States,for whom this moment seemed unimaginable for nearly three generations, and who have been starved for respect, recognition, and reconciliation for fifty years, the president’s trip to Havana opens emotional and ideological floodgates, restores frames of respect and self-respect, makes revisions and reconsiderations possible.

And before the Stones play tonight in Havana, and Obama is relegated to having served as an opening act, it’s important to reflect a little on the afterglow.

The afterglow matters.  Obama’s Cuba visit was a watershed, and his Havana speech seems a rhetorical and political match to his Cairo speech.  The words and the moment will live on as a slow burn in the political imagination of Cubans in Cuba and everywhere.  They push against a long experience of paranoia, division, disillusionment.  And even when we know few changes will come immediately to Cubans who most need urgently need them, the force and weight of the speech might begin to make possible solidarities between Cubans who have been divided by the Cold War and its political lies.

Whatever else Barack Obama has done or been as President, his speech in Havana was a masterpiece of historical reckoning, diplomatic cunning, and deep political and affective recognitions.  Modeling conciliation and reconciliation, the President gave a speech that reordered hemispheric politics and was unprecedented in American political discourse. The speech insisted that Cuba and the U.S. “shared the same blood,” living in a new world colonized by Europeans.

The president then said something no U.S. President has said before, “Cuba, like the United States, was built in part by slaves brought here from Africa. Like the United States, the Cuban people can trace their heritage to both slaves and slave owners.” With two sentences Obama reframed the relationship between Cuba and the United States, invoking the common legacies of slavery and black history to trace the kinship and brotherhood he had invoked.  Many of us, historians in particular, thrilled to this enormous recognition, and it was as though works like Ada Ferrer’s Freedom’s Mirror or Edward Baptist’s The Half Has Never Been Told had somehow resonated in the White House while the speech was being drafted.

The speech and its discursive strategies merit a long analysis. The mystery of authorship is yet to be confirmed but the President’s frequent speechwriter, deputy national security adviser Ben Rhodes, very publicly visited Miami before the trip on a listening tour and, meeting with prominent figures of the Cuban diaspora. It is clear that it was shaped by the need to invoke histories of both race and capital, and the memory of loss and rupture became coded through race persistently and with force. Through the speech, and during the visit, Obama performed rhetorical acts of modesty and daring openness to criticism, putting himself, his race, and his class forward as an exemplary achievement of U.S. democracy.  This president was the very opposite of belligerence or bullying.  He seemed extremely at ease, and the speech, like his humor and conciliatory words, inspired confidence and calm.

Obama emitted happiness and ease in Havana.  He was natural.  Some of us watching imagined Cuban gestures, identified with jest and laughter (choteo!), connected Obama’s physical presence with Cuban phenotypes, his elegance the proof of natural refinement: a tipo fino. 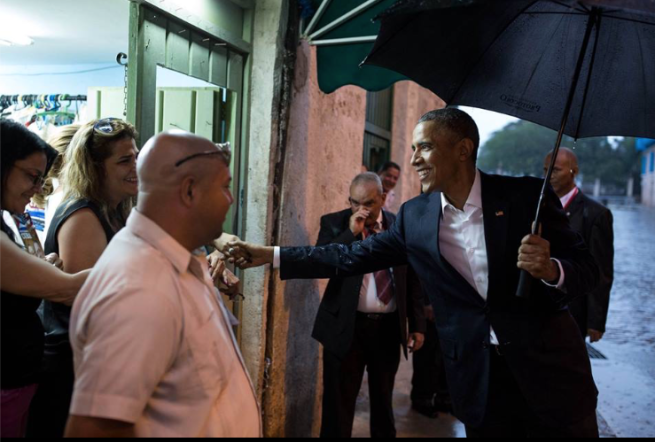 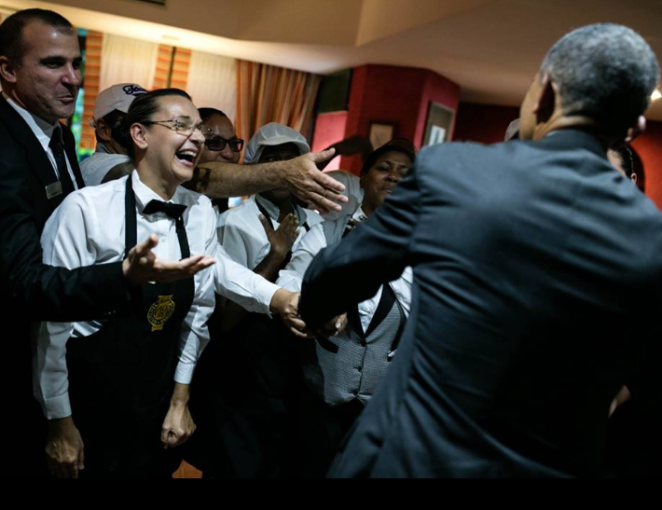 His words and his performance, his ease and confidence also made him, in the eyes of many Cubans, a kind of fantasy surrogate, a projection of a future Cuban leader. In anecdotes and even interviews, Cubans delightedly noted that he could probably run for President of Cuba and win.  For those of us in the United States, remembering Toni Morrison’s words about Clinton, the speech from Havana may have just made Barack Obama America’s first Afro-Cuban president.

For Cubans in the diaspora, many of whom helped to elect the President, Obama’s speech reminds us of a great violence:  the loss of our complex racial identity in the United States.  Our national and individual identities of mixed race were erased, distorted, and splintered by the Cold War, as the Revolutionary State claimed the cause of racial justice and mixed race Cuban exiles were whitewashed into a white refugee demographic in the United States.  Millions of Cubans of mixed racial descent, who left Cuba and were for decades misrepresented or erased, saw themselves represented once again in a major key in Obama’s narrative. Thousands of newer Afro-Cuban emigrants, who have searched for themselves in the distorting mirror of Cuban-American identity and who have helped to reshape it, saw themselves reflected in the rhetorical transits about race in Obama’s speech.  Millions of Latin Americans who have watched with horror and sadness the theater of the Cold War and the Special Period shed tears at the truths of Obama’s speech:  ordinary truths and lived history, told in a theater of politics and mirrors.

The speech was not about the U.S. deigning to recognize us, to recognize Cuba.  It was about a President, cediendo la palabra, yielding to what Cubans know about themselves, and transforming the terms of a confrontation into a dialogue, a  a dialogue between Cubans that has been frustrated for fifty years.

On the left and the right, from Madrid to Mexico to Chile to Miami, a huge collective sigh of relief went up.  The recognition of suffering, of wounds and sadness, the division of families and friendships. And although I am not a great fan of familial models for imagining political communities, there is no doubt that in the case of Cuba it is a lasting historical truth, and a province of reconciliation.  In merely naming them together in one discursive breath, Obama brought together subjects and communities that were the protagonists of the Revolution and the cold war, but always pitted against one another, implicitly and explicitly, in contests between liberty and social justice.  By merely speaking in one political performance of the history, the wounds and contributions of Afro-Cubans and Cuban exiles, Obama’s speech attempts a remarkable kind of repair–the kind Teresita Fernández invokes in her meditations on beauty and broken objects–using a discursive gold that marks and mends the breaks.

There is a great deal more to say, but as the aging white British rockers take the stage in Havana and thrill the crowds with a spectacle timed, no doubt, to overwhelm Obama’s words, I am thinking still of the speech.  It brings to mind a beautiful minor key of rock and roll, and a reversal of rock narcissism, Lou Reed’s I’ll Be Your Mirror.*

Despite the great performance of pride that Cubans constantly rehearse, the Cuban national imaginary is also largely constituted by shame, sadness, and distortion. Cubans–Afro-Cubans, mixed race Cubans, white Cubans, Cubans on the island, Cubans in the diaspora, and hard liners of revolution and exile– are bound by something they secretly feel but rarely admit in public:  the  fact that our experiences of empire and cold war, repression and racism, scarcity and dispersal, have left us all with a sense of being twisted and broken.

It’s a secret weight. We don’t like to talk about it very much. It’s hard to write about it too.

But Obama’s speech, although it does not feel sophisticated to say so, changed something. The words spoken by a black President of the United States made possible recognitions and reflections that were deeply enmeshed in geopolitics but also embedded in Cuban memory and a national unconscious. By refusing paternalism, condescension and browbeating, by recognizing U.S. faults, and by underlining Cuban struggle and beauty too, the speech started pulling at the knots of shame and suspicion, and acknowledged instead a mutual mirroring, a necessary dialogue.  Obama’s speech summoned modesty and friendship, a wish to change the narrative and retell the story.

By reflecting back and forth between the U.S. and Cuba, he offered a public and yet an intimate reflection on nationhood that Cubans can recognize and claim, that they need not disavow or condemn.  Between the lines, Cubans knew that they were listening together in a way no one else could, that they shared a heavy weight, and that they might also share in the recognitions.  They might be able, as Obama put it, to refuse to be trapped by history.

And although many of us might want to go further with the psychology of mirrors, thinking of analyst Jacques Lacan’s mirror-stage as another irresistible metaphor, I think it is the loving reflections of friendship in Lou Reed’s song that rules the reception of Obama’s speech. Obama’s Havana Speech and its celebration of resilient national being felt like a love song. For Cubans like me,  who have every reason to distrust all the guises of U.S. power, all its affective recourses, it’s hard to admit, but it’s true.

So for a moment, beyond cynicism and pessimism, and even with the reality principle beating down the door, Cubans starved for good words and tired of bad mirrors, can stay with that music for awhile, and think about the afterglow.

*”I”ll Be Your Mirror” was first released in 1967 on the album the Velvet Underground  and Nico.